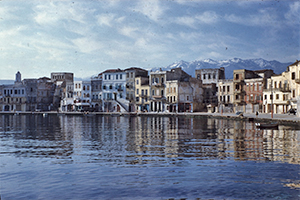 Over the decades the slide library of the Institute of Classical Archeology of Heidelberg University was equipped by its faculty members with photographs which they had taken on their travels and excursions. From the 1930s until the early 21st century a pool of more than 4,700 topographic images was compiled, depicting many regions of the Mediterranean. The authors were professional photographers such as Dieter Johannes as well as professors such as Roland Hampe and Jörg Schäfer and other staff members, PhD and undergraduate students

The regular use of the slide library was recently terminated and therefore this treasure trove of archeological photographs was doomed to fall into oblivion. As part of a collaboration between the Institut für Klassische Archäologie and Heidelberg University Library the images were digitized and made available via the heidICON image database, thus remaining accessible and utilizable for research.